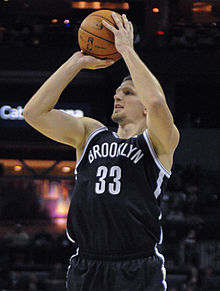 Mirza Teletović (born September 17, 1985) is a Bosnian professional basketball player who currently plays for the Phoenix Suns of the National Basketball Association (NBA). He also represents and captains the Bosnia and Herzegovina national basketball team. Standing at 2.06 m (6 ft 9 in), he plays at the power forward position.

Teletović lived in Bosnia and Herzegovina during the Bosnian War of the 1990s. He grew up in the city of Mostar, the subject of an 18-month siege when he was a child. When Teletović shared his account of the war, he said,

I was seven years old when the war started. First you start seeing that there's no food, then grenades come down, the whole city is shaking, and you hear people screaming. Every day, your parents come in and say 'our neighbor died, our cousin died'. Always somebody dying. One day, I asked my mother, 'Is anybody alive?' It was very, very rough for us. It left, I will say, a memory...All my friends and me are playing [basketball] and then you hear the sirens like the grenades start falling down and just run to your house and hide. If I have to die, I die. For basketball, I will do anything.[1]

As a youth, Teletović spent some of his time playing soccer, as well as learning kickboxing and karate. However, he felt most comfortable with playing basketball, as he played the sport at a local basketball court not far from his home.[2][3]
Professional career
Europe
Sloboda Tuzla

Teletović made his professional debut with the club Sloboda Tuzla, of the Basketball Championship of Bosnia and Herzegovina, during the 2002–03 season. In his first season with the club, he averaged 7.2 points and 2.7 rebounds per game, while in his second season, he increased his stats to 26.4 points and 6.6 rebounds per game over 17 games in the league.[4]
Telindus Oostende

He then joined the Euroleague club Saski Baskonia (known as Tau Cerámica at the time), of the Spanish ACB League, in 2006. He played his first game in the Spanish League on October 1, 2006, in a game against Pamesa, where they won on the road by 95–94.[5] In his first season in Euroleague, Europe's first-tier level, continental-wide competition, he averaged 5.3 points and 2.8 rebounds per game. He declared eligible for the 2007 NBA Draft, but went undrafted.

In the next three seasons with the Spanish club, he became a starting player, and eventually became the captain of Baskonia, and one of the cornerstones of the team. In 2008, he won the Spanish League Rising Star Award. A year later, in 2009, when the club became known as Caja Laboral, he was named the MVP of the mid-season three game Spanish King's Cup tournament.[6]

Over 10 games in the 2011–12 Euroleague season, he averaged a career-high 21.7 points and 6 rebounds per game. However, Caja Laboral didn't reach the Top 16 round. In June 2012, Teletović reached a contract buyout agreement with Baskonia, for an amount of €2 million, in order to play the next year in the NBA.[7]
https://www.bih-pravo.org & https://epravo.ba